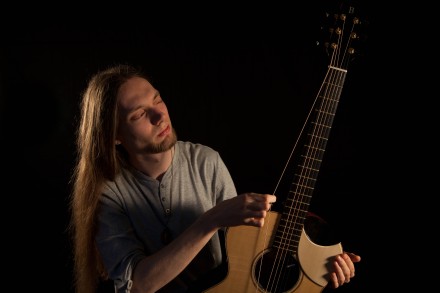 Confession time: this post contains no sandwiches. Nor does it contain any bread. Fillings neither. Not even any gardening.

What it does have, is my cousin, who is the best guitar player I know. It bears mentioning that I am a semi-professional musician, and have met, seen, heard, some world class musicians in my time.

Why am I going on about this? He’s just released a video, to go along with his new record contract, of him covering a song you may have heard. If you like it, maybe you could share it via whichever of your networks you choose. Heck, even if you don’t like it.

Anyway, enough familial bias and musical gushery. I give you: Mike Dawes!

You can buy the single, as well as the guitar tab, here. 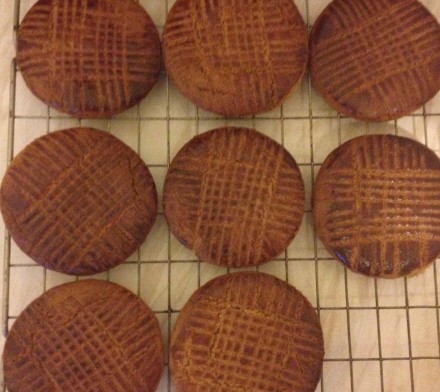 OK, so gingerbread is pushing the blog’s original sandwich remit a touch far, I know. My continuous unemployment has prevented me from indulging my more pricey foody agenda, and my continually-increasing obsession with baking bread has shifted things more in that direction. But this recipe comes from The Handmade Loaf. So it counts. Quiet at the back.

I’ve had these earmarked as a bake for when I’m with my lovely lady who, sadly, lives an hour or so away whilst we each pursue our fledgeling careers. She’s a big fan of ginger, honey, gingerbread, spices… Basically these was always going to find favour with my sweetheart.

I ground the spices (coriander seed, cinnamon, nutmeg, black pepper, ginger, cardamom, fennel seed, all carefully balanced as per the recipe) in a pestle and mortar, weighed out the plain white and light rye flours and sugar, added in the bicarbonate of soda, whilst the honey and butter were combined, melted, and set to cooling by aforementioned ladyfriend. I mixed the dry ingredients together by hand, breaking up the lumps of sugar until it was an even mix.

Once the butter and honey had cooled I added the double cream, and stired. They didn’t combine very attractively, but I managed to get the cream reasonably evenly distributed, if not emulsified. I added this to the dry ingredients, and stirred into the smooth(ish) dough you see below. 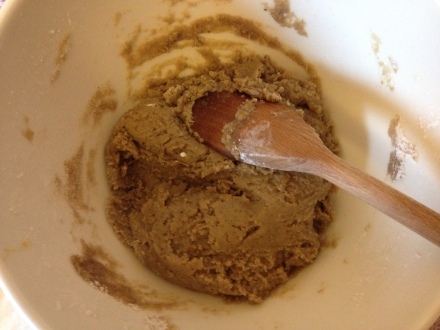 At this stage it was fairly pliable, if a touch unruly, but I managed to roll it into a sausage and wrap in in cling film (which was surprisingly unclingy; budget cling film is most definitely a false economy).

After slightly longer chill than the prescribed two hours (pie delays play), I rolled it out (a challenge at first), and cut out circles of the dough, before spreading them over a baking traylined with baking parchment. I then glazed them with 1 egg + 1 egg yolk, and used a fork to create the pattern as per the purty picture in the book. 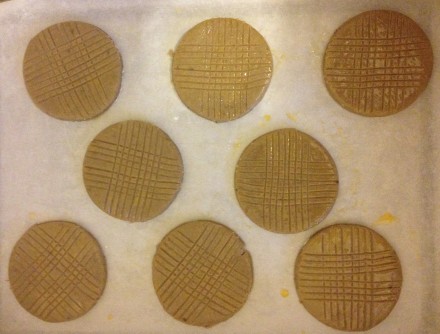 Egg-washed, scored, and ready for the oven!

I baked them for the lower end of the siggested time – 10 minutes – because I prefer a bready texture, but the glaze ensured the tops coloured nicely and had a crisp to the surface.

The texture was divine, and the spicing rich and complex. Following some advice from the Mellow Bakers forum I was generous with the ginger, a decision I didn’t regret as, despite having so much going on spice-wise, the ginger was still able to make its voice heard.

As is perhaps becoming a moot point, I would make these again. I struggle to recall a recipe of Dan Lepard’s that hasn’t been both a triumph of well written instructions and a delectable treat to be made again. Yes, I’m a bit of a fan.

I think these would be great at christmas, and might even work baked a tree decorations… Ooh now there’s an idea!

For a variety of reasons I won’t bore you with, I haven’t worked since August of last year (besides a couple of agency shifts). I have found baking, and blogging about baking, to be a tremendously beneficial activity in giving the long, empty days a sense of purpose and achievement. At the risk of turning this into an open-journal therapy session, there have been times when I needed a boost to my mood, and baking has provided it in spades.

I have been looking for work, unsuccessfully, since the beginning of the year, and have begun to lose hope of finding anything suitable, especially considering that, long-term, I know what I want to do (Music Therapy) and am 2/3 of the way through the three year MA that will allow me to do it (though on a hiatus). But in the mean time, I need to earn some money, and even when I’m qualified, I am unlikely to begin working as a therapist full-time over night. I’ll be piecing together freelance work from therapy, music teaching, etc.

Like many, I’m sure, the thought of earning money from my bread-headed obsession has crossed my mind more than a few times. END_OF_DOCUMENT_TOKEN_TO_BE_REPLACED

I was idly hypothesising about how one might slash the dough of a baguette to achieve the characteristic tear, when it struck me that this here internets would probably hold the answer. Well done internets; you did me proud. These videos are comprehensive, and come from a name I’ve come to trust: Jeffrey Hamelman. Serious skills. Videos after the break. END_OF_DOCUMENT_TOKEN_TO_BE_REPLACED

These were scheduled as part of April’s Mellow Bakers Handmade Loaf bake-along, but it’s taken until now for me to get round to making them. I’m glad I made the effort though, they were a real treat.

They are essentially savoury croissants: a stiff, white, milk dough with layers of  butter (oh-so-much-butter!) incorporated once the dough has proved (proven?) over night. END_OF_DOCUMENT_TOKEN_TO_BE_REPLACED 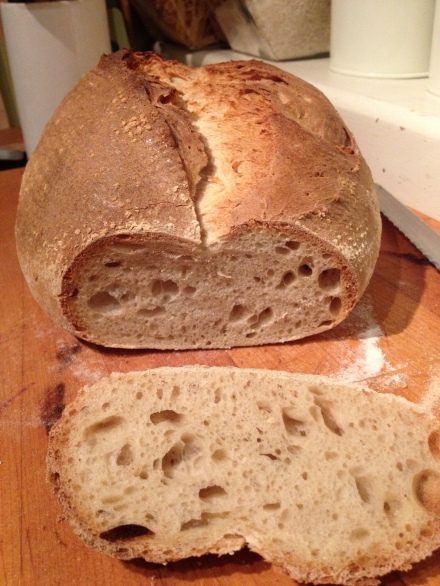 You would think that the first loaf in the first baking book I owned would have been a sensible place to start. But I skipped over the white sourdough recipe (from A Handmade Loaf by Dan Lepard) in order to get to the mill loaf, which got me so excited a while ago. It’s taken me a while to go back and try the white.

I’m glad I did. END_OF_DOCUMENT_TOKEN_TO_BE_REPLACED

My intention to bake along with the Mellow Bakers bake-along have been somewhat hampered by a lack of funds to acquire the necessary ingredients to bake (along).

Fortunately, due to a morale-boosting donation from my grandparents I have been able to order the more hard to find ingredients (white poppy seeds, and whole rye grains, I’m looking at you), and popped in to Shipton Mill whilst on a quick visit to a good friend of mine in Tetbury. It is an advantage being in the same county as such a well-regarded Mill, although this is the first time I’ve made the trip.

I bought some stoneground wholemeal, malthouse, light rye, wholegrain spelt, semolina, and Italian “00”, as well as a round cane banneton. Phew!

Can’t wait to get to baking! 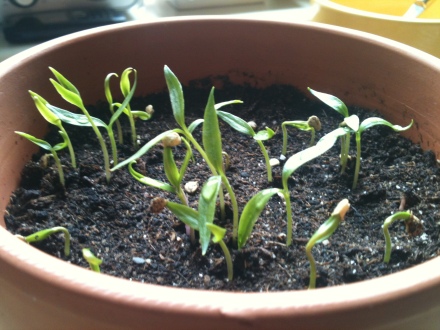 I no longer recognise myself. I have become a different, later, version of myself. This is one of those personality shifts that crosses into a new integral version number: Will 7.0 say, or a whole other big cat; OSWill Polecat.

What in the blazes am I talking about? I’ve taken up gardening. There it is, in black and white. I am, one could say, a gardener, albeit a somewhat naive one, still wet-behind-the-ears.

Allow me to explain. I always knew I’d take up gardening one day, but until the beginning of March, that one day was a fairly distant, hypothetical one. I could imagine it, but it held no immediate appeal. Then my ever-inventive ladyfriend, instead of buying a trite ‘n’ tacky Valentine’s card, bought me a “grow your own chilli” kit, complete with seeds, compost and rather fetching terracotta plant pot. END_OF_DOCUMENT_TOKEN_TO_BE_REPLACED 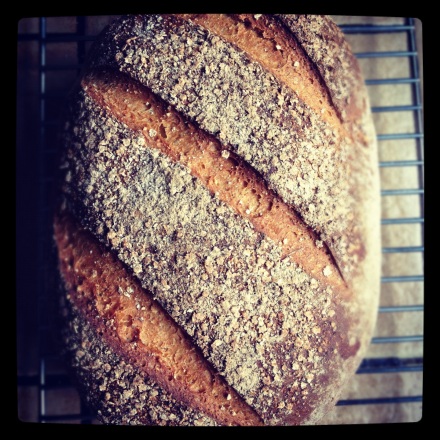 Here we are, at the tail end of April. Where, may I ask, has the first third of 2012 gone? Up in a cloud of flour in my case. Though not as much flour, of late, as I would have liked.

On reading my blog a good friend of mine said, amongst kind words, that I apologise too much for not writing; that people wouldn’t really notice the dates of posts, and that I ought not to mention it. So I’m keeping absolutely schtum. Zip. Nada. Not a word about being behind in the mellow bakers Handmade Loaf bake-along despite only being in month one. Just as well they’re/we’re mellow…

So – quick white loaf. I must admit that, going in to this bake, I was a little bored of white breads. Despite a preference towards the more whole of meals, I have baked mostly white loaves since taking up all this yeasty business. On top of that, another of Dan’s recipes – his sour cream loaf from Short and Sweet, has lodged itself firmly at the top of my favourite white recipes list.

On the other hand, this bake offered the chance to try a couple of new things: baking with fresh yeast, finally sourced from Sainsbury’s, and adding millet flakes. Add to all this a couple of bodged transfers from improvised peel to baking stone in the recent past, and the stakes for this bake were particularly high.

Can you feel the excitement? Try and remember to breath. END_OF_DOCUMENT_TOKEN_TO_BE_REPLACED

I wrote this a short while ago, and somehow failed to publish it. Ahead of my upcoming post about my first mellow bakers loaf, I thought I’d let it out of its hiding place, for the linky goodness if nothing else! Needless to say, I am still somehow running out of time, despite ample supply.

My brief foray into group baking was something I enjoyed very much, but haven’t quite managed to recreate. I had fully intended to make a batch of pita bread along with the folks over at #ShortandTweet, but ran out of time. Since then, I have been incredibly busy (especially for a jobless wonder) and very low on energy. But April marks the beginning of a new bake along, one to which I fully intend to apply myself as fully as possible.

The Mellow Bakers are working their way through “The Handmade Loaf”, the very book that got me started on serious bread baking. I intend to bake and blog each loaf so long as I’m able, and also try and cook up a sandwich recipe for those that inspire me. I’m really looking forward to learning from my fellow bakers, and have already been in touch with some very friendly sorts.

They are also baking through another book, “Bread” by Jeffrey Hamelman. So if you fancy joining in, pick your poison, and jump in! I’m a relative newby and everyone’s been dead friendly, and there’s a real range of abilities, including some people who have baked it all before and/or are schooled in such things.